Those Were The Days

After the news that P&O are soon to be challenged on the Dover-Calais route by two other ferry companies, it is hardly surprising that they would come up with what is known in the media as a “spoiler”.

Having had only SeaFrance with their unreliable timetable, ill-maintained ships and appalling customer service,  as competitors for the last few years, P&O now faces some eager new challengers on the Dover-Calais route.  Not surprisingly they are responding with a pre-emptive “Special Offer” in an attempt to to retain as much of their market share as possible during the new lines’ start-up period.

The limited duration P&O offer comes into effect from today, coinciding with the launch of their brand new ship the Spirit of France (commencing service on 9 February), which joins her spectacular sister ship Spirit of Britain.

TRAVEL ON SPIRIT OF FRANCE OR SPIRIT OF BRITAIN
BOOK BY 14 FEBRUARY, TRAVEL BY 13TH DECEMBER (T’s and C’s Apply)
The offer is available online from 10am today and is only available to book for a short time, so make sure you don’t miss out on a great opportunity.

Subject to restricted space, sailings and dates. Price shown is only valid for travel on the Spirit of France or the Spirit of Britain. Book by the 14th February with all travel to be completed by the 13th December. Price shown includes £2.50 web discount. P&O Ferries reserve the right to withdraw or amend the offer at any time without notice.   From £39/47 euros each way for peak periods: 30th March – 15th April 2012, 1st June – 10th June 2012, 20th July – 2nd September 2012.

Frogsiders has received news from DFDS, the owners of the successful and popular former Norfolk Line ferry service, that they are to start a new Dover-Calais Ferry Service in association with LD Lines, starting on February 17, 2012 .

We are delighted to announce that a DFDS Seaways and LD Lines joint initiative will launch a new Dover-Calais ferry service, starting 17 February this year.

Together with our thriving Dover-Dunkirk operation and now, LD Lines’ Newhaven-Dieppe and Portsmouth-Le Havre routes, we are able to offer an unrivaled choice of ferry routes to France.

We look forward to welcoming you onboard during 2012!

To celebrate the launch of our Dover-Calais route, we have released another fantastic special offer.

Two cross-channel trips for the price of one! 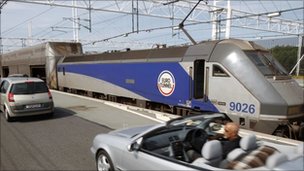 Eurotunnel is investigating after passengers were taken from Folkestone to France and back again without being able to get off the train.

Seven vehicles were left on the train on Saturday because staff forgot to unload one of the wagons.

The error occurred after a fuel spill meant one of the wagons was left empty.

When the train reached Calais, staff unloaded the front cars but did not realise there were more cars behind the empty wagon.

Train crews realised what had happened while they were on the way back to Kent and made an announcement but were not able to do anything until they got back to Folkestone.

The passengers, who had to wait a further two-and-a-half hours to reach their destination, have been given a refund and offered a ticket for the next time they travel.

Do you have something to sell or something to announce to English speaking residents and homeowners in Northern France?

From today all advertising in Frogsiders Classified section is absolutely FREE OF CHARGE!!